It finally happened. Well... kind of at least. The next big step in the development of the game has been made: Update 0.2.0 is here!

But let me warn you right away: this update releases in a 'preview' state for a good reason. Many things are unpolished, unbalanced or unfinished, as the game has been rewritten completely from scratch over the past year.

Yes, you heard right. Every single line of code was recreated from the ground up, so I can finally get rid of all the core problems the old version had. The game now is much more stable, scalable, optimized and no longer based on a 3 years old browsergame approach.

So... let's take a look at the new features first. The biggest change is the new research and progress system: 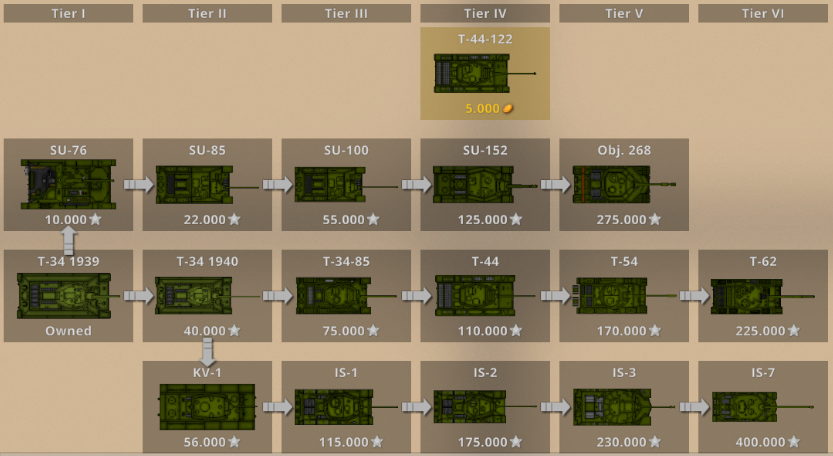 All tanks (except starter tanks and premium or event tanks) need to be researched with experience points from previous tanks now. Once their hull is researched, they can be bought with silver and you can start playing with them to earn experience for modules or the next tank.

You might think something like "Wait! Modules?" now. Don't worry, you heard right! Every tank has its own modules now! 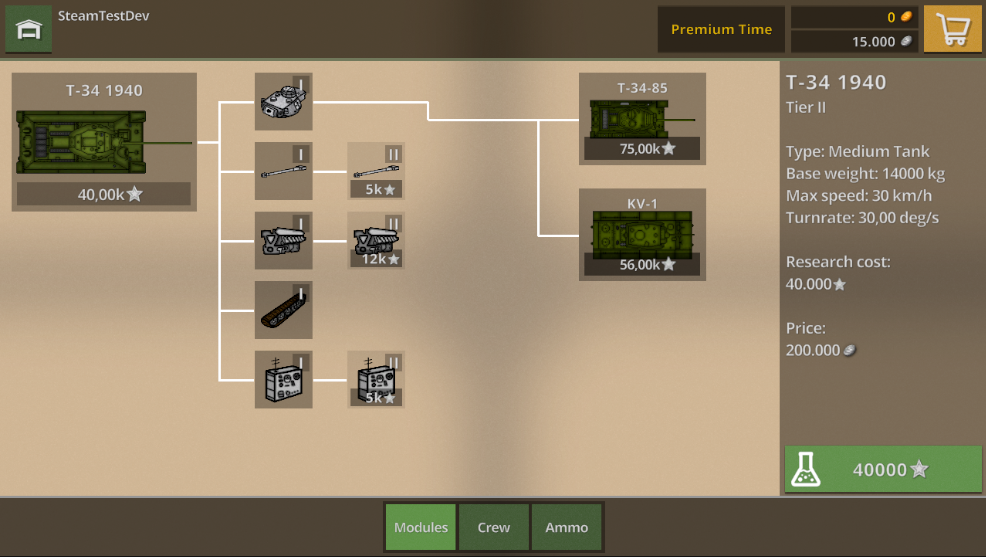 Every researched tank starts with a basic version of every module, and many of them have better or different versions available for research. There is no silver involved in modules, it's all pure research with earned experience on the tank.

Of course this opens up many new possibilities, as tanks are much more 'modular' now

One example for this is the Panzer III, the german Tier I starter tank. It has a regular 50mm gun with a long barrel, and a 50mm gun with a short barrel, which has less range and penetration, but a much faster reload time. This hopefully gives you, the player, the option, to choose the module which fits your own playstyle the best.

OK, the current options might be a bit limited, as not many vehicles have multiple guns or turrets at this point. But I can assure you that more will follow in the near future!

This brings me to the next topic - SKINS! (Yes, finally!) 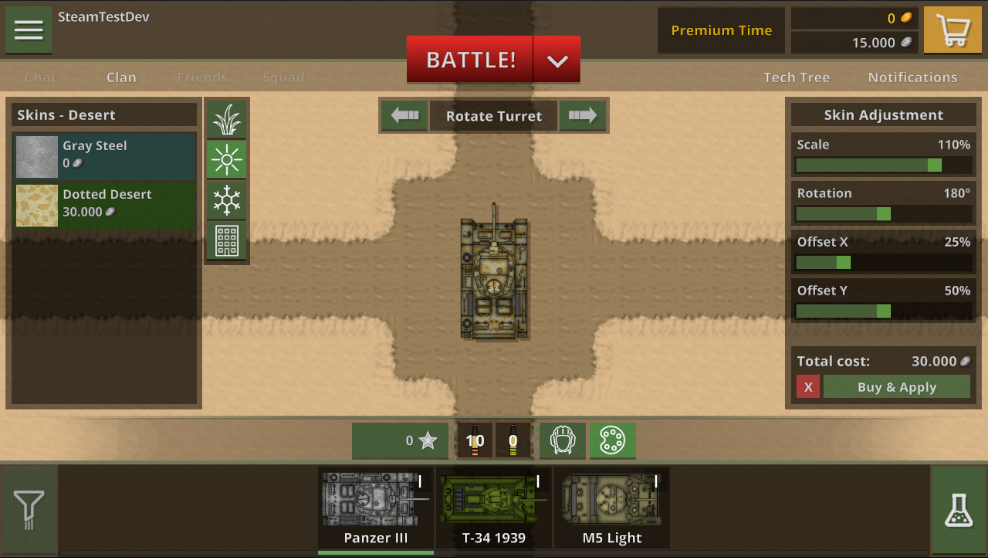 This feature was requested multiple times in the past, and has finally been integrated directly into the base of the game.

You may now choose from a steadily growing list of skins for forest, desert, winter and town environments. Some skins cost silver, some skins cost gold, others are hidden and only available through specials or events. The skin type will be choosen automatically in battle, depending on the environment.

You can also make slight adjustments to most skins. Scale, rotation and offset sliders are available for most patterns and are completely free of charge once the skin itself has been bought.

You may now wonder how this is related to the previous topic. Well, thats simple: the future!

There are not many different skins and environments included in this update directly. But adding them isn't too complicated and an ongoing process, just like the modules.

And before I forget about it, the crew system has been slightly overhauled as well. 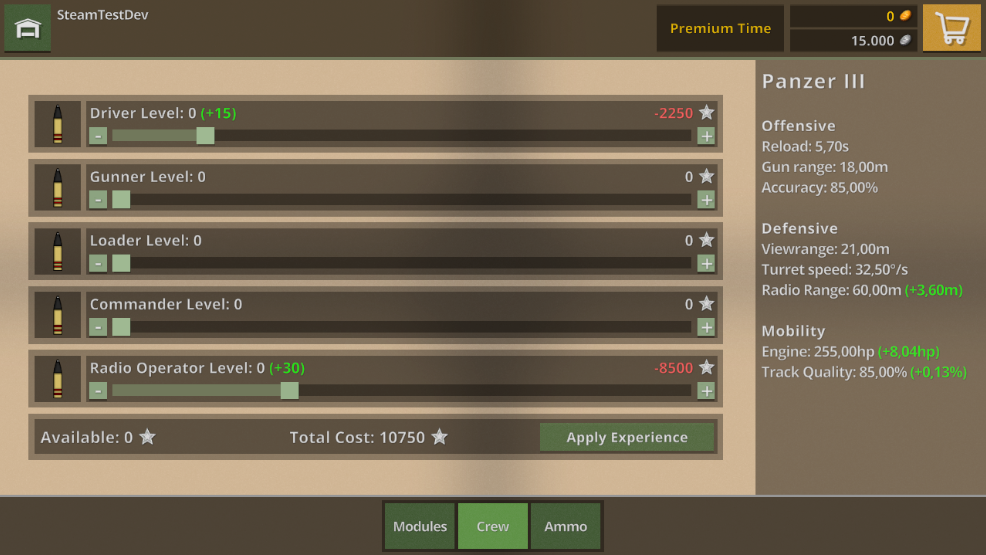 Instead of 10 levels, each crew member has 100 levels now. They cost less and are increased using the regular experience earned by the tank.

And as you might have noticed on the screenshot (just ignore the placeholder ammo icons for the crew members), there is also a parameter for component quality, 'Track Quality' in this case. This base value is inherited by the tank modules, and slightly improved by certain crew skills. But now guess what: it's completely useless at the moment!

It's there for an advanced damaging system, planned for a future version of the game. Some modules like tracks, engines or radios have durability/quality values and proper hitboxes in the game world already, so they will most likely be damageable in the future...

Oh, that's it about the new features already? Mhh... let me talk a bit more about this update then, as it's a big milestone for the game.

Some of you might know already that the game started as a simple browsergame back in 2017. It looked horrible, it sounded horrible, had no content but was quite fun to play already.

After a bit more polishing it was released on Steam, and suddenly more people became interested in it. So more updates and optimizations were needed, and the old browsergame foundation quickly reached its limits. After squeezing out pretty much everything that was possible with the limitations in update 0.1.9, it was clear that a better solution was needed, so I began recreating the game from scratch.

It's written entirely in C#, uses a lightweight 2D renderer with Vulkan support, is very modular, stable, scalable and optimized. In comparison to the old version it's almost 3x faster, making it also ready for mobile devices in the future.

But please don't worry too much about it, as the new foundation is finally here now. This means faster, smaller updates, more new features and almost endless possibilities.

I'm personally really glad that so many of you like this game and its idea, and I can't thank you enough for still supporting it.

The last year was horrible for this project, with no progress, minimum support and almost no communication. But I'm ready to take back the lead to turn this game into something interesting and unique, so stay tuned for more very soon.

- Drop me your hate messages on Discord

- The AI is still dumb but has proper pathfinding now